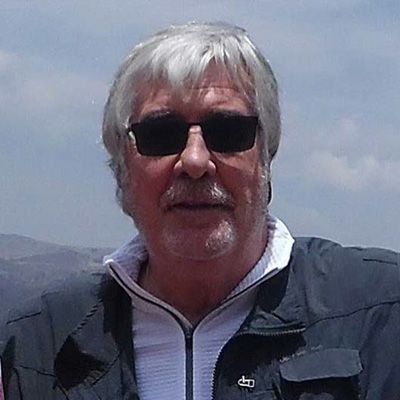 Licentiate in Business Administration (Universidad Católica Argentina), Certified Public Accountant (Universidad Católica Argentina), Diploma in Argentinean Culture (Universidad Austral), Graduate studies in the Wharton School of Business. Several courses of specialization in Argentina and internationally. Was professor and keynote speaker in themes related to his specializations as well as his interest in ancient civilizations and contemporary art. CEO in the pharmaceutical industry until his retirement. Vice President of the Luis Pasteur Obra Social. Member of the Executive Committee of the Industrial Center of Laboratories of the Pharmaceutical Industry (CILFA) Director of several Limited Liability companies.

To walk along the Inca footpaths in Peru is a pleasurable experience as well as an exercise in reflection. As the mind flies alone accompanying the condors in serene harmony with the environment, the questions flow and it is impossible to answer them all. How could such advanced societies be so left behind? How would Latin America be today if the arrival of the Europeans had amalgamated the two cultures in an act of happy confluence?

The encounter of 1492 was certainly the most important event for Europe and The Americas, perhaps even for humanity. A special moment when different ways of perceiving the universe greeted each other for the first time. Two societies that could peacefully share their most valuable treasure: the knowledge accumulated during thousands of years of observation, trials, errors and discoveries. From the interchange of those experiences, a new dimension of thought, an advance of centuries in a short time, a leap forward in the slow process of accumulating wisdom could have been achieved.

But that was clearly not the intent, much less the result. The encounter was a clash of cultures in which there was no proposal of association, but manifested in intentions of possession first, domination later, and finally the destruction of thousands of years of wisdom to replace it with what was already known.

The reasons why the Europeans adopted this behavior were nested in the unconscious, product of an education where exclusion was a cultural trait based on the white man’s hypothetical superiority, on the need to increase the power of his nations even if that meant surpassing the limits of natural moral law, which was grounded in a dogmatic and sectarian religion.

Humanity wasted that encounter, even though there was a society that obtained enormous material advantages, which allowed it to overcome several problems. Europe in general, Spain and Portugal in particular, enjoyed all the benefits with which America contributed. Benefits that only in a small proportion were gold and silver. In spite of its terrible management, the riches of the new continent permitted the Iberian Peninsula to occupy a privileged place. A situation that allowed them to convince the future that their intervention was a humanitarian one, and that thanks to it a whole new world, that would have otherwise lived in the wild state for generations, was now civilized.

In that other world, the one that would later become Latin America, the feeling of injustice, of ethnic genocide, of the extinction of a culture that included special knowledge, of a dispossession that began in the sixteenth century and that, in other ways still persists, remains. A style founded on magic, community, harmony with nature and on biodiversity; a particular vision, a different logic and another conception of time were lost forever. Its progressivism was manifested in cities that left Rome and Paris in the shade with astonishing scientific abilities, unparalleled alimentary diversity, novel artistic expressions, and a socio- economic system that worked well Global Commons Review 2 s Spring 2018 s Cover s Contents s About Us 51 and was the tool used to build the Inca empire since rival nations adhered to it for their own convenience while in Europe it was war that built empires. Nothing about those tales of barbarians, savages and primitives was true, however they were so successful that lasted across the time.

The Iberian crowns and the Papacy openly declared to be in favor of the defense and recognition of native’s rights, however, privately, they accepted and shared the opinions and ways that opposed the attitudes they expressed. Two completely different realities are thus lived: for the Old World, the narrative preserves the romanticism of discovery, of the civilizing epic and of the motherland; but for the South, in the new continent, inhabited by its bastard sons and daughters, the discovery, conquest or invasion is more than a semantic discussion, it is a living memory that leads to violence, rancor, poverty and discrimination.

Trudging the Inca paths is exhausting and the frequent stops to catch my breath gives me the chance to dialogue with the guides that accompany me, owners of clear looks, few words and different ideas. They fail to grasp my questioning, they are happy in both worlds, using all the best that technology provides them while clinging to their millenarian mores.

The absolutist attitudes of Spain and Portugal were highly criticized by the other European crowns, wielding moral arguments. Nevertheless the truth is that they wanted to participate in the booty and could not. They easily abandoned all their redemptive principles when, in the mid-nineteenth century, they had the opportunity to colonize the majority of Africa, Oceania and Asia. The pattern of behavior was re- Global Commons Review 2 s Spring 2018 s Cover s Contents s About Us 52 peated and little has changed in the twenty-first century despite the passage of time: the domination of the Other and its possessions continues to be the historical constant that mobilizes the powerful; violence, the instrument of choice barely moderated by the control of the economic markets instead of the physical territories; and religions show, more and more, a strong fundamentalist bias.

Despite the evangelizing intention of the mission, on his initial trip Christopher Columbus did not bring any friars or priests. As a good diplomat, his baptisms were in honor of Spain and the Catholic Kings, and then he generalized the use of toponymics that referred either to the Christian heritage or to the conqueror´s European origin. That was his first domain declaration. Those who seconded him followed the same pattern: they took territorial possession fulfilling a formula where adhesion was the only choice, accredited the place by giving it a new name even though it already had one, begun a methodical survey of the valuables to deal them out among themselves, ensured the control of the economic activities and then distributed land ownership at their own will, while taken advantage of the beauty of local women whilst evangelizing them. So that there would be no doubts about the intentions of the newcomers, their first act entailed the immolation of the highest local authority and the construction of a Catholic church on the foundations of the indigenous temples they called pagans. This was the triumph of unity over duality, a principle as natural as it was ancestral, which also perished in the diverse battles for dominion.

Fatigued by physical exertion and mental concentration, the sight of Machu Picchu in the distance deeply moves me. I can no longer Global Commons Review 2 s Spring 2018 s Cover s Contents s About Us 53 bear the weight of my backpack and one of the guides carries it for me, expecting nothing in return. Men of different vision, their qualification depended on the interest of the dominant group: to Columbus they were raw material for slave commerce; to the Iberian courts vassals obliged to pay tributes; to the conquerors and colonizers, a means of production at very low cost; to Rome, half-naked hominids that could swell the statistics of catholic parishioners; and to the rest of the Old World they were mere policy instruments. To all the formers they were objects, to me they were subjects who opened my mind and without whom I would not have ended a voyage projected with so many expectations.

To many people in the south of the American continent, indigenous are still savages and not as good as they were before. As a log- Global Commons Review 2 s Spring 2018 s Cover s Contents s About Us 54 ical result of hundreds of years of violation, spoliation and racism, they now live in isolated, impoverished, brutalized communities, a direct consequence of historical discrimination and not of their historical nature.

Paradoxically, the society that is now rediscovering the true story and the terrible mistakes that were made, continues marginalizing and exploiting them as modern slaves. Just like before, the same society is still saying one thing and doing another, claiming that the descendants of Amerindians wish to remain separate rather than to integrate. They do not realize that they are what the conqueror and its heirs wanted them to be.

While waiting for the bus that would take me to Aguas Calientes, I took leave of my guides with a single thought in mind, I had to write my reflections of the path, I owed them that. A different world would have been possible if the two continents had embraced each other rather than one engulfing on the other. To think how that different world might have been would be to enter into the Kingdom of Uchronia, a speculative exercise. It is enough to know that the parties did not add up. On the contrary, the entropy that came down from European ships was so extreme that synergy never left the box.

I walked between the two greatest masters of humanity: nature and history. They are no longer listened to, there are other voices that sound. But they are still there, one roaring uncontrollably for its temple to be respected again and the other awaiting for it´s rewriting stripped of ideologies to ensure its lessons are useful.

New encounters of cultures, albeit on a minor scale, are repeated daily in different parts of the world. Implementing the same methods Global Commons Review 2 s Spring 2018 s Cover s Contents s About Us 55 of domination would be a dishonor to the lessons of nature and history. So that they are not converted into new lost opportunities, synergy must emerge from the bottom of the box. And that is our responsibility!

Licentiate in Business Administration (Universidad Católica Argentina), Certified Public Accountant (Universidad Católica Argentina), Diploma in Argentinean Culture (Universidad Austral), Graduate studies in the Wharton School of Business. Several courses of specialization in Argentina and internationally. Was professor and keynote speaker in themes related to his specializations as well as his interest in ancient civilizations and contemporary art. CEO in the pharmaceutical industry until his retirement. Vice President of the Luis Pasteur Obra Social. Member of the Executive Committee of the Industrial Center of Laboratories of the Pharmaceutical Industry (CILFA) Director of several Limited Liability companies.