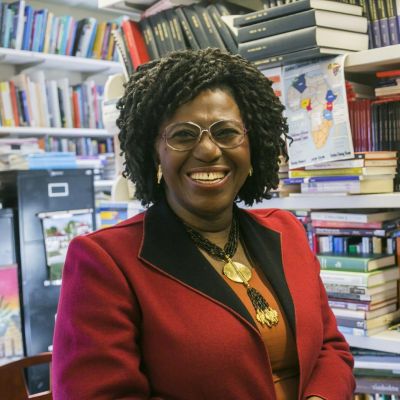 President of the World Council of Comparative Education Societies (WCCES, 2016-2019) and a former President of Comparative and International Education Society (CIES), is a Professor of African, African Diaspora and Comparative/ International Education, social institutions, African social history, and the study of gender at Cornell University in the Africana Studies and Research Center. She has published extensively on various topics of education, especially higher education.

Contemporary African countries have been grappling with the various remnants of the colonial legacy. One persistent reality that cannot be overlooked is how the continent of Africa was divided into countries, whose borders were drawn capriciously and according to the interests and geo-political, historical, and economic factors by the Europeans at the 1884/1885 Berlin Conference with no regard for the Africans. These artificial borders split pre-existing cultural/ linguistic, political, and economic spheres, brought in different people from various histories, ethnic identities, and religious affiliations and lumped them together. The national/official and educational languages adopted especially at the higher education level are enduring reminders of European presence in Africa.

The question of the legitimacy and viability of the African countries within their inherited borders was a topic of central importance at the time of independence starting in the mid-1950s. Thus, in conceptualizing and creating the continental body eventually named the Organization of African Unity (OAU), some African leaders called for a redefinition of the borders to reclaim agency and design an African-centered map with an African agenda, African perspectives Regional Stories – Africa | Asia | Europe | Middle East | The Americas Global Commons Review 2 s Spring 2018 s Cover s Contents s About Us 37 and meanings of citizenship, rights, and obligations. While all the leaders were unwavering and determined to advance their development agendas, two currents emerged, one- the progressive front, known as the Casablanca Group under the leadership of figures such as Kwame Nkrumah of Ghana, advocated for a pan-African entity articulating the need to re-draw a broader continental entity leaning towards a United States of Africa, while the other group called the Monrovia Group was in favor of the status quo and were supportive of the inherited borders. Even though the views of the group that supported the preservation of the colonially drawn borders prevailed, all African leaders recognized the urgency of creating and strengthening nations and embracing the diversity that was prevalent in Africa.

In this context, formal education in Africa was considered not only an instrument for socio-economic development amidst the policy implications of the popular human capital theory, but also a means for nation building, citizenry, and a sense of belonging. Besides, African countries having clearly defined their development agendas, they were still framed in accordance with resolutions, recommendations, and guidelines formulated by the United Nations system and its specialized agencies starting with the first continent-wide educational forum of the Addis Ababa Conference in 1962. It occurred when African countries, that were transitioning and emerging as nation-states saw education as an effective instrument for social progress.

In emulating various UN-led forward-looking resolutions, the continent of Africa and the different countries were receptive to ideas, programs, and goals set by the United Nations including the Global Commons Review 2 s Spring 2018 s Cover s Contents s About Us 38 Global Citizenship Education (GCE) and it was well received. However, different perspectives exist, and the challenge is implementation. Educational organizations have also expressed their perspectives. In this essay, some of the positions and actions are presented.

At the continental level, the African Union (AU) has addressed some pragmatic dimensions of global citizenship without framing it within an education agenda, although education is viewed implicitly as important in the actualization of the targeted goal, for instance, the idea of creating and issuing a continent-wide AU passport to all Africans by 2020, announced at the AU Summit in Kigali (Rwanda) in July 2016. The goals, which included travel and economic growth throughout the continent, also aimed to foster continental integration, which is in line with the earlier Pan-African perspective that articulated a connection among people of African descent globally. The AU has, de facto, addressed the meaning of the “Global” beyond the continent, in its structure by region of the continent, and has created one additional section, the Diaspora to encompass Africans living outside the continent, irrespective of their citizenship and nationality. This appears to be the template for articulating consciousness building through education. Other continental organizations with education mandates have articulated more clearly the educational dimension in GCE.

Thus, the position paper of ADEA (Association for the Development of Education in Africa-http://www.unesco.org/fileadmin/MULTIMEDIA/FIELD/Dakar/pdf/ADEAPositionPaperonESDGCED.pdf) on “Global Citizenship Education in Africa” captures an African perspective. For instance, the sub-theme 4 of its 2017 Triennale “Educa- Global Commons Review 2 s Spring 2018 s Cover s Contents s About Us 39 tion and Training in Africa themed “Revitalizing Education Towards the 2030 Global Agenda and Africa’s Agenda 2063” is titled “Building Peace and Global Citizenship through Education.” It articulates a link between Global Citizenship Education and peace education as a purposeful mechanism for promoting values of peace and conflict prevention among the young and future adults by designing the relevant curricula, creating partnerships and using “system-based interventions” towards “transformative pedagogy”.

UNESCO sub-regional offices in Africa have been devising action-oriented strategies, as the different regions aim to move forward with specific action plans. They have voiced their respective and converging statements and positions about GCE in different meetings and documents and have taken various actions towards further discussions and implementations.

For instance, in collaboration with UNESCO Abuja and UNESCO Headquarters, the Dakar Regional UNESCO office organized in July 2015, a capacity-building workshop on Global Citizenship Education for West African countries with the purpose of guiding “the key stakeholders with a mutual understanding of the concept, core issues, challenges, and opportunities of global citizenship education in order to stimulate further implementation of GCED at the country level,” (UNESCO Dakar Office, http://www.unesco.org/new/en/ dakar/about-this-office/single-view/news/global_citizenship_education_for_west_african_countries/).

Similarly also, in July 2016, in collaboration with the UNESCO Headquarters and the South African National Commission for UNESCO, the UNESCO Regional Office for Southern Africa held a Global Commons Review 2 s Spring 2018 s Cover s Contents s About Us 40 meeting on Global Citizenship Education, in Johannesburg. At this meeting, the global dimension of GCE was articulated in the opening statement in the following terms: “in a globalized and interconnected world with increasing manifestations of both solidarity and intolerance, technological power and environmental disruption it is becoming critical that education systems equip learners with values, knowledge and skills that are based on and instill respect for human rights, sustainable development, and health and well-being” (ROSA 2016, http://www.unesco.org/new/en/harare/about-this-office/ single-view/news/southern_africa_regional_meeting_on_global_ citizenship_educa/).

In June 2017, the UNESCO Regional for Eastern Africa also organized a “Regional Technical Workshop on Education for Sustainable Development (ESD) and Global Citizenship Education (GCED): Transforming and Sustaining Our World through Learning” (http:// www.unesco.org/new/en/nairobi/about-this-office/single-view/ news/press_release_regional_technical_workshop_on_education_for/). These are a few examples of the events that have taken place, within the African regional economics communities (RECs) and their interface with the UNESCO regional offices.

As a result of the prevailing aforementioned positions of the advocates of the preservations of the individual nation-states at the founding of OAU, the educational systems of the current 54 African Nation-states that constitute the African Union operate autonomously, especially at primary and secondary levels. Even at the higher education level, exchanges are relatively limited despite the existence of the Association African Universities (AAU) that advo- Global Commons Review 2 s Spring 2018 s Cover s Contents s About Us 41 cates for partnerships. Therefore, while the African Union, the RECs and especially the UNESCO regional offices have joined the chorus of endorsement of the Global Citizenship Education, inevitably, it is at the individual country level that the implementation of the broadly stated recommendations will be actualized. Hence, following this broad introduction, the next step will require a focus on case studies of selected countries in the different parts and regions of the continent in their actualization of the Global Citizenship Education.

President of the World Council of Comparative Education Societies (WCCES, 2016-2019) and a former President of Comparative and International Education Society (CIES), is a Professor of African, African Diaspora and Comparative/ International Education, social institutions, African social history, and the study of gender at Cornell University in the Africana Studies and Research Center. She has published extensively on various topics of education, especially higher education.